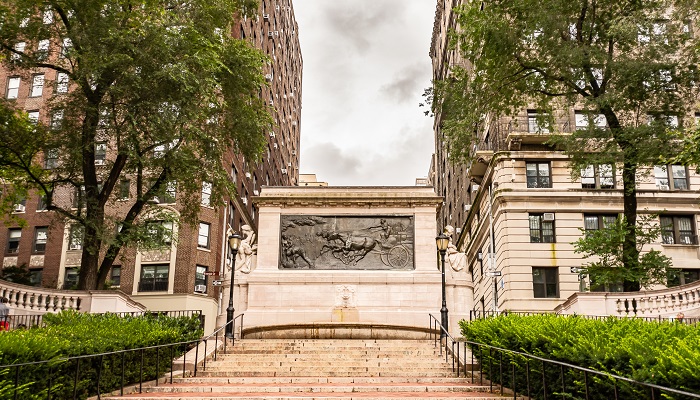 New York City’s Upper West Side is steeped in history and culture -- with reminders of prior eras sprinkled along Riverside Drive in the form of monuments and memorials.

History buffs and outdoor enthusiasts alike will enjoy visiting these enduring monuments. Haven’t been in a while? Take a leisurely walking tour and soak in the sights of the season.

If you are planning to visit all the memorials in one day, you can either start at 100th Street and work your way down to 72nd Street, or vice versa. The route is just over a mile and a half – we’ve also included the distance between each stop to help you along the way. Only interested in visiting one or two monuments at a time? No problem – addresses for each monument are also listed.

A massive monument and one of NYC’s most visually stunning, this memorial pays tribute to past and present firefighters. It comprises a large staircase, fountain, plaza, and central memorial with a bas-relief sculpture of a horse-drawn fire engine.

This memorial was constructed in 1913 and gained prominence once more following 9/11.

Distance to the Joan of Arc Memorial: 0.4 miles 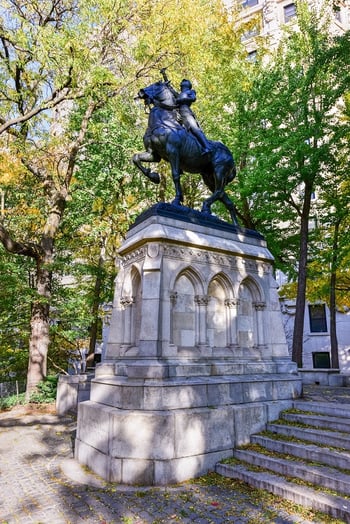 If you are heading south on Riverside Drive, the next monument you will see is the Joan of Arc Memorial.

Constructed in 1915 and the first memorial in NYC honoring a real-life (not fictional) woman, this monument is a hidden gem in Riverside Park. Female sculptor Anna Hyatt Huntington brought the figure to life, while architect John van Pelt incorporated several stones from the tower where Joan of Arc was imprisoned.

Distance to the Soldiers’ and Sailors’ Monument: 0.2 miles

Distance to the Fireman’s Memorial: 0.4 miles

Located relatively close to the Joan of Arc Memorial, the next stop heading south is the Soliders’ and Sailors’ monument. This turn-of-the-century structure honors Union soldiers and sailors from the Civil War. Its pillars and domed roof were based on an ancient Grecian monument and are formed of white marble.

The indoor area is only open to the public on sporadic days throughout the year, but you can take in the sight of this classic monument anytime.

Distance to the Joan of Arc Memorial: 0.2 miles 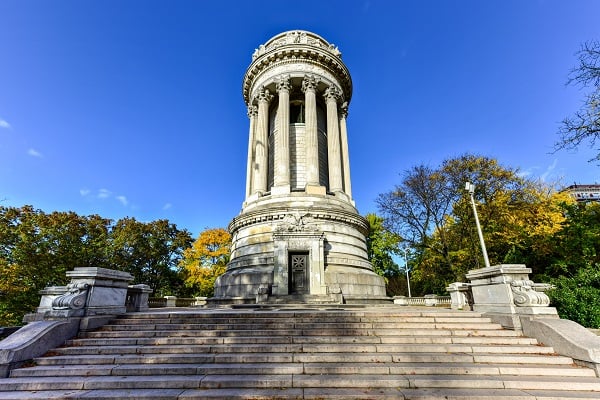 Continuing south along Riverside Drive, you’ll find a plaza with a quiet space and plaque paying tribute to the victims of the Holocaust. The plaque within was dedicated in 1947, and while several larger monuments had been proposed over the years, none received funding.

Today, the idea of a larger monument has given way to leaving the plaza as originally constructed.

Distance to the Hamilton Fountain: 0.4 miles

Distance to the Soldiers’ and Sailors’ Monument: 0.4 miles

Before the advent of automobiles, New York City was dotted with watering stations for horses. One of the best-preserved and most ornate is the 1906 Robert Ray Hamilton Fountain – which is just south of the Warsaw Ghetto Memorial. Carved in white marble, it depicts an eagle with wings spread and a dolphin’s head spraying water.

Interestingly, it was dedicated by the great-grandson of Alexander Hamilton – Founding Father and the first Secretary of the Treasury.

A larger-than-life sculpture of former First Lady and humanitarian Eleanor Roosevelt stands at Riverside Drive and 72nd Street. One of the Upper West Side’s newest monuments, it was dedicated in 1996.

The bronze statue sits amidst plaques and pavers detailing Roosevelt’s contributions to both the United States and the world during her lifetime.

Distance to the Hamilton Fountain: 0.2 miles

The Life You Deserve. The City You Love.

For carefree living in the City - with a helping hand! - look no further than 305 West End Assisted Living. Our impeccable location means you’ll be steps away from shopping, dining, entertainment, and more. Continue living in the city you love - at any age. Learn more about our luxury assisted living accommodations here in the heart of Manhattan.